Acrostic Poem
The first letters of each line are aligned vertically to form a word
Cinquain Poem
a five line poem containing 22 syllables; two syllables first line; four syllables second line; six syllables third line; eight syllables fourth line; two syllables fifth line.
Concrete Poem
A poem in which the words are arranged to create a picture that relates to the content of the poem.
Couplet Poem
Two-line poems with a fun and simple rhyming pattern. Each line has the same meter and their endings rhyme with one another. Couplets are often humorous.

Diamonte Poem
DIAMOND-SHAPED POEMS of SEVEN LINES that are written using parts of speech. Similar to Cinquain
Limericks Poem
A limerick is a humorous poem consisting of five lines.

The first, second, and fifth lines must have seven to ten syllables while rhyming and having the same verbal rhythm. The third and fourth lines only have to have five to seven syllables, and have to rhyme with each other and have the same rhythm. 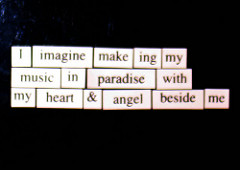